Coming of Age in Plainfield: 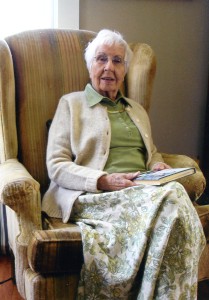 At age 103, Kay Dilger Metcalfe, is the possessor of Plainfield’s Golden Cane, presented to the oldest town resident. She is also one of the wisest people in town, which explains why she was the first person I thought of when I embarked on this study of successful aging in women. In my three long interviews with Kay, I learned a great deal from her about the keys to successful aging. (Click here to see the complete story of Kay’s successful aging.) These are some of the qualities that have enabled her to thrive in her elder years.

Independence and Agency, Beginning in Childhood 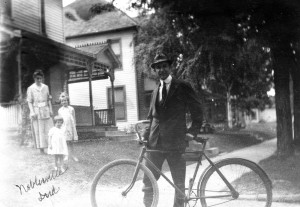 Kay, with her big sister and mother, welcomes Dad home from work. He commuted by bicycle.

Born in Noblesville, Indiana, on November 15, 1912, she was christened Mary Kathryn Dilger, but decided during high school that she wanted to be known as Kay, a name that has stuck. 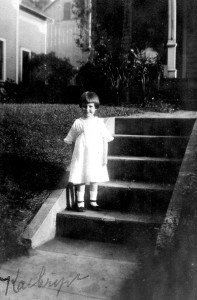 Kay has always been a deep thinker and a questioner. At a young age, she developed an idea that has lasted from childhood to old age: “The idea that I’m responsible for myself.” 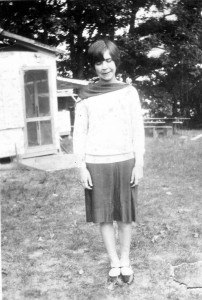 When Kay was about 12 years old, she got scarlet fever. Her family brought her on a camping trip to Windsor Pond to recover. Not only did she regain her health, but she, and the rest of the family, fell in love with the area. In the mid-1930s they built a cabin on the Pond, and in 1946 they bought the farmhouse in Plainfield, where Kay now lives with her daughter, Susan.

Love for Words and Lifelong Engagement with Reading and Writing

Like many other successful agers, Kay has always been fascinated with words. Starting in junior high school, she began keeping a journal where she copied quotations from her reading—a practice she still observes as a centenarian. Kay describes this lifelong practice in a video clip from January 2011, when she was 98 years old.

In her 90s, Kay began to write about the aging process and shared these writings with others in the community. To see some of these writings, click here. 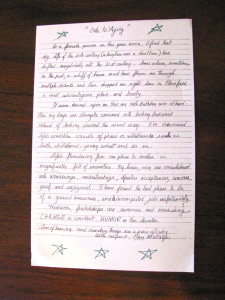 Engagement in the Creative Arts

Since childhood, Kay has loved painting and drawing. Her interest in the arts—as well as her agency in taking responsibility for her own life—helped her to achieve her dream of “a season in Paris” when she was about 20 years old. This life-changing experience was part of a 3-year program in art and architecture at the Parsons School of Design in New York City. 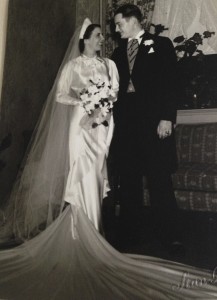 Kay’s wedding gown was from the Paris atelier of Gabrielle Romanov, who became a designer after she and her family fled from Russia during the Revolution.

As was typical for middle-class women of her era, Kay devoted herself full-time to marriage and motherhood. A daughter, Susan, was born in 1941, and a son, Tristram Metcalfe III, in 1943. 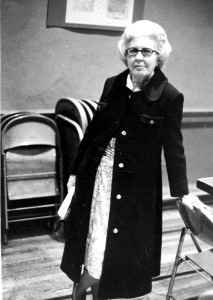 Kay at work in the Yonkers Public Library

Once her children left for college, Kay was eager to use her artistic talents in the world outside her home. She took a job designing visual displays for the Yonkers, New York, Public Library, a job that lasted until her retirement 17 years later.

One of Kay’s stenciled trays

In retirement, Kay took up the early New England craft of tole painting on household objects. She became well known in Plainfield and beyond as a master of this craft, which tapped into her love of history as well as her artistic talent. 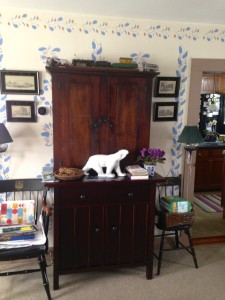 Kay used her art and design skills in renovating the Plainfield house and stenciling the walls.

A Flexible Attitude and Openness to Change Even in Old Age

In 1988, Kay’s husband, Tris, had a cerebral hemorrhage and was hospitalized for several months. When he came home from the hospital, it was clear that the big house in Yonkers was not suitable for an invalid, and so Kay decided to sell the house and move to the smaller house in Plainfield. She took care of Tris for nearly 10 years, caring for him at home and driving him around town. During this time, she put her optimism into practice: “These things happen in life, and you have to cope with them the best you can.” Tris passed away at home on February 7, 1997.

Agency at the End of Life as at the Beginning

Living on her own for the first time in her life at age 85, Kay remained strong. Her son lived nearby, and she had many good friends in Plainfield. She was active in church activities and kept busy with reading, writing, and tole painting. But realizing that she might need more help in years to come, the family made a decision. In 2000, when Kay was 88, her daughter, Susan, and her husband, Larry LaRock, moved from California to Plainfield, where they lived with Kay in the farmhouse.

This living arrangement has worked out remarkably well for both generations. A few years later, Kay wrote: “It is a good place, my home. Sue is wonderful and so is Larry. They are completely in charge of this farm and their living.” Then, in an afterthought, she wrote in the margin, “and I am in charge of my living.” Even when faced with the infirmities of age, Kay still manages to be “in charge of [her] living” as she had been as a young girl. 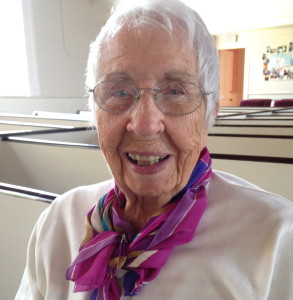