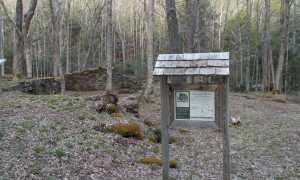 The Mill site on River Road

The Plainfield Historical Society has recently acquired a 1.5 acre parcel along the Mill Brook in Plainfield where there’s a story waiting to be told. The Plainfield mill site contains remnants of three mill foundations that date from the early 19th century through the first decade of the 20th century  Thanks to the Historical Society’s recent conservation effort, the public will soon be able to visit the trio of mill site remains, which illustrate the technological innovation and basic evolution of early water-powered industry in Massachusetts.

The three mills show the progression in waterpower technology that reflects the industrial changes that occurred nationwide at the time. They vary in size and complexity, and their different wheel configurations portray changing production practices and waterpower design. Water delivery systems to the mill appear to have changed over time, perhaps reflecting the shifting water regimes that accompanied the re-forestation and farm abandonment trends that swept the 19th and 20th century Massachusetts landscape.

As part of the conservation project, the Historical Society also purchased 8.6 acres of forested upland along the River Road for an acquisition total of 10.1 acres. Public support for the project was evident in the fundraising campaign, which raised almost $18,000 from individual donors and an additional $5,000 award from the Highland Communities Initiative Small Grant Program. With the property now safely in hand, the Historical Society would like to open the site to the public, and is carefully considering plans for walking trails and an on-site historical interpretive program.

There is much to be learned from the physical remains of the former industry and habitation found in our hills: old stonewalls foundations, wells, mills, and kilns create a snapshot of what the landscape might have looked like at some point in the past. These remains allow our imagination to create intricate stories of how settlement patterns and economic forces have shifted over time, and remind us of the ever-changing and enduring relationship between industry and our environment – a relationship that is clearly illustrated by the historic Plainfield mill site. – Highland Happenings: A Newsletter of the Highland Communities Initiative. Volume 3, issue 2. March 2004

The Mountain Miller: An Authentic Narrative by William A. Hallock. Published by The American Tract Society

Joseph Beals (1752-1813), The conversion and religious life of Joseph Beals, a miller of Plainfield, Mass.also called the Mountain Miller, lived a life of trusting in his own righteousness for the salvation of his soul.  After he lost his house to a fire, he turned and consecrated his life to Christ. His wife was very upset with his new life and steadfastly refused join him, and even hoped for his death. She finally repented and united with him in the faith. Joseph Beals was known as a model of true Christian piety.

WILLIAM ALLEN HALLOCK, (1794–1880) was born in Plainfield, Massachusetts. His father, Moses Hallock, was a minister and an educator. William attended Williams College and then Andover Theological Seminary. He became corresponding secretary to the American Tract Society for many years and examined every manuscript for publication. He was editor of “The American Messenger” and “The Child’s  Paper.” He wrote biographies about Justin Edwards and Harlan Page.