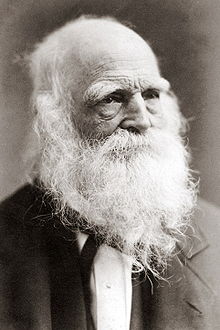 William Cullen Bryant, an American romantic poet, journalist, and long-time editor of the New York Evening Post. was born on November 3, 1794, in a log cabin near Cummington, Massachusetts; the home of his birth is today marked with a plaque. He was the second son of Peter Bryant (b. Aug. 12, 1767, d. Mar. 20, 1820), a doctor and later a state legislator, and Sarah Snell (b. Dec. 4, 1768, d. May 6, 1847). Bryant and his family moved to a new home when he was two years old. The William Cullen Bryant Homestead, his boyhood home, is now a museum. After just two years at Williams College, he studied law in Worthington and Bridgewater in Massachusetts, and he was admitted to the bar in 1815. He then began practicing law in nearby Plainfield, walking the seven miles from Cummington every day. On one of these walks, in December 1815, he noticed a single bird flying on the horizon; the sight moved him enough to write “To a Waterfowl”.