Dr.  W. Irving Maurer purchased a house and acreage in Plainfield in 1911 – .and the property is still in the family to this day.  It is currently owned by his last living child – Margaret Maurer Gibson who will be celebrating her 100th birthday in March of 2014.   The property is located on the right just beyond the Thatcher farm on the road to Cummington.  The property was jointly owned by Margaret Gibson and  Mary Skinner, until her death.  The brother, Lloyd Maurer, purchased the farm just a little further down the road—-with white house on right and very large barn on the left of the road.  Since 1916, there have been Maurers in Plainfield—-and even now, we all hold the area very dear to our heartsand each of us try to spend some time in Plainfield every summer – down to the 5th generation! ~  Lynn Skinner

This house was part of a trio of homes belonging to the White family. Samuel and his brother Ziba (his house is still standing) had homes that flanked father, Caleb’s which is no longer standing. The lot for this home ran southward upon the road 13R (1 Rod =16.5 feet) and then running Westwardly far enough to equal 1 Acre. In the year 1800 Mrs. Polly White, a young married woman of 18, got lost near her home in the woods. After wandering for an hour she heard the welcome dinner bell of a neighbor and followed the sound to safety. In 1873 Polly’s son, O.S. White lived in the house and worked at the refitted brickyard making bricks. In the early 20th century Dr. Irving Maurer, President of Beloit College purchased it for his summer home. His daughter, Margarent Gibson, inherited the home and continued the summer tradition with her family and children and grandchildren until the present time. Margaret, now in her 90s, tells stories of trying to travel the steep, muddy road from Cummington to Plainfield.

Below are some family portraits, a few brief biographies on W.Irving Maurer and some excerpts of Mr. Maurer’s writings. 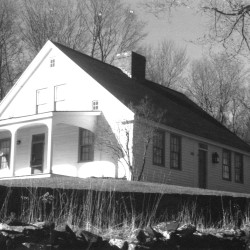 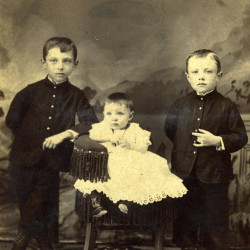 ca. 1884 Washington Irving Maurer, about age 5, with two of his siblings. Location, no doubt, is Garnavillo, Iowa. On left: Oscar Maurer Middle: Norma Maurer, less than 1 year old On Right: – W. I. Maurer 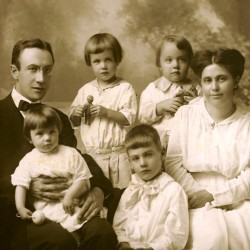 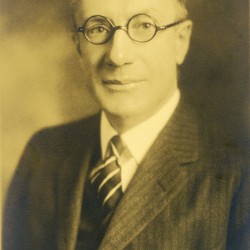 1925 W. Irving Maurer – Taken while Irving and Minnie Maurer were guests of President and Mrs. Coolege at the White House, in the autumn of 1925. They were attending the National Council of Congregational Churches in Washington, D.C 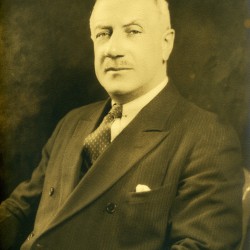 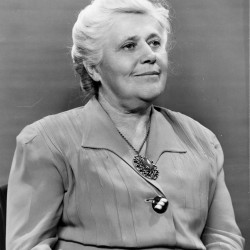 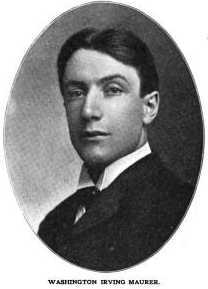 Washington Irving Maurer was born at Garnavillo, Iowa, on September 2, 1879. He graduated in 1904 from the Garnavillo High School, and for the next three years assisted his brother, Oscar E. Maurer, in publishing the ‘Garnavillo Sentinel’. The next two years were spent in teaching school. In the autumn of 1899 he entered Beloit College Academy, and one year later entered the college at Beloit with the class of 1904. He led the freshman team in debate against Ripon College, but was compelled to see his team defeated by a unanimous decision. He was a member of the sophomore debating team which defeated Carleton College at Northfield, Minnesota. In his junior year he led the debating team which defeated Knox College at Galesburg, Illinois. In this year also he entered the local contest in oratory with his oration on Bismarck, entitled, “The German Monarchist.” He won the preliminary contest, the home contest, the State contest, and secured first place in the Inter-State Contest on May 1, 1903, at Cleveland, Ohio. In his senior year Mr. Maurer won the prize for the best senior oration on graduation day. At present he is teaching in Beloit College Academy.~Winning Orations of the Inter-state Oratorical Contests 1890-1907, Vol 2, Inter-State Oratorical Association, 1908, pg 271

In 1924 Beloit College turned to its earlier tradition of calling a son of the College to the presidency; on this occasion it was Irving Maurer of the Class of 1904. Irving Maurer had gone from Beloit to Yale, receiving both a Bachelor of Divinity degree and a Master of Arts in 1908. As a Congregational minister, Maurer held two significant pastorates prior to returning to Beloit: that of the Jonathan Edwards Church in Northampton, Massachusetts, and Washington Gladden’s First Congregational Church in Columbus, Ohio. Irving Maurer brought a deep feeling for the older Beloit, a broad ranging humanistic outlook, and a devotion to the College Chapel as a forum for all interests of the College. Educated under Eaton’s regimen, President Maurer continued to beautify the Vesper Service, stressing the role of music in its heightening effect. The earlier values of the Founders were those professed by President Maurer as animating forces in the life of the College: a non-sectarian, democratic spirit, characterized by simplicity and mental activity and by moral idealism in public life. He saw Beloit College as an institution, “cultural rather than professional, animated by a deep sense of truth, profoundly religious but knowing no antagonism between science and religion.” To his students he stressed the charm and attraction of the world of books. His love of the arts was mirrored in the erection of the Theodore Lyman Wright Art Hall. His belief in student collegiality at the outset of a college career is seen in the construction of the men’s dormitories in 1927-28. Faithful to the ideals of an earlier Beloit, and to the soundness of a broad humanism, Dr. Maurer carried the College through the depression years of the 1930s, and he presided over America’s entry into World War II. Granted an extension of his presidency beyond age 65, so he might preside at the College’s Centennial in 1946-1947, an untimely and unexpected death in February 1942 ended his presidency. ~ Excerpted from “Seven Presidents of Beloit College” by Dr. Robert Irrmann:

A Change for Joe

Our Lives and Duties