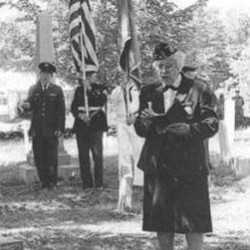 The Plainfield Project: A Community Caring for One of Its Own (published in 2005) by Rebecca Mlynarczk, was written to honor the life and legacy of Arvilla L. Dyer. After being diagnosed with stomach cancer, Arvilla, who had served the town in so many ways, became the focus of what she came to call “the Plainfield Project,” a project that changed her life. Click here to read the entire project.

Miss Dyer served as town clerk for 26 years, burial agent for 24 years, president of the Cemetery Association for 26 years and secretary of the Master Street Address Guide Committee. She was veterans’ graves officer for 24 years, president of the Plainfield Historical Society for 30 years, and chairwoman of the historical commission for 23 years and of the Bicentennial Committee. Click here to read it.
Born in Pelham on Jan. 21, 1923, daughter of C. Frederick and M. Arvilla Sampson Dyer, she moved to Plainfield in 1924, where she graduated from Hallock Memorial School. She was a 1941 graduate of Amherst High School and received her bachelor’s degree in special education from Western Michigan College of Education, now Western Michigan University, where she majored in occupational therapy.
Miss Dyer worked as an occupational therapist at various Veterans Administration hospitals in New England before entering the Army Reserve. During the Korean War, she went on active duty. After joining the regular Army, she served 20 years in Army hospitals around the country, retiring as a lieutenant colonel.
She was master of the Plainfield Grange for 20 years and lady assistant steward, and a member of the state and national granges.
She was a member of Plainfield Congregational Church, and served as a deacon and chairwoman of the music committee. She was commander of Cummington Post 304 American Legion for 28 years and adjutant for 18 years, and a past matron of Joel Hayden Chapter 171 Order of Eastern Star.
She was an emergency medical technician with the Cummington Ambulance for 14 years and served as a first responder.
Miss Dyer also had been editor of The Plainfield Post since 1972 and a member of the What Nots. – excerpt from Find a Grave

To watch an interview of Ms. Arvilla Dyer click here.