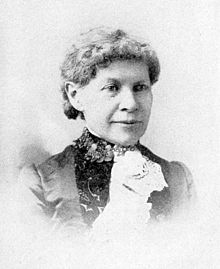 Martha Joanna Reade Nash Lamb (August 13, 1829 – January 2, 1893) was an author, editor and historian. She was born in Plainfield, Massachusetts, to Arvin Nash and Lucinda Vinton. Educated at the Williston Seminary in Easthampton and Northampton High School, she published her first article, “A Visit to My Mother’s Birthplace,” in a local newspaper, Hampshire Gazette. On September 8, 1852, she married Charles A. Lamb. They moved to Chicago in 1857 and Martha became involved in charity work. With Jane C. Hoge, she helped found the Home for the Friendless and the Half-Orphan Asylum. In 1863 she was secretary to the United States Sanitary Commission Fair. Her marriage ended by divorce around 1866, and she took her literary talents to New York City, where, in 1883 she purchased The Magazine of American History and became its editor. She was elected to membership in fifteen historical and learned societies in the United States and Europe.