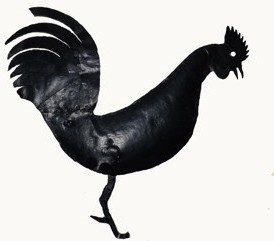 Not long after the erection of the meeting-house belfry, as some boys were playing around the meeting-house, one of them, Comfort Beals by name, threw up a stone which struck the cock which was placed on the summit of the spire as a weather vane and bent his tail feathers. His
comrades told him that he would be put to death, which it is presumed he actually believed, unless he went up and straightened them. In this dilemma, he climbed up by the lightning rod as far as the bell, where he rested awhile, and then ascended to the vane. After restoring the tail to
its proper position, he descended, without meeting with any accident. Years afterward, his son, Levi, when the old meeting-house was about to be torn down, “for and in consideration of the sum of fifty cents to him in hand paid,” ascended to the vane from the bell deck in the same
way, removed it, and brought it down in safety. This vane was placed on Wm. Robinson’s barn, where it did service until a few years since. ~ History of the Town of Plainfield Charles N. Dyer 1891