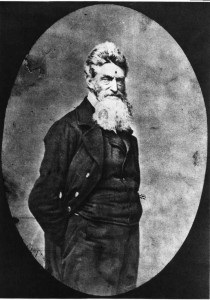 John Brown (May 9, 1800 – December 2, 1859) was a white American abolitionist who believed armed insurrection was the only way to overthrow the institution of slavery in the United States. John Brown was born May 9, 1800, in Torrington, Connecticut. He was the fourth of the eight children of Owen Brown (February 16, 1771 – May 8, 1856) and Ruth Mills (January 25, 1772 – December 9, 1808) and grandson of Capt. John Brown (1728–1776). Brown could trace his ancestry back to 17th-century English Puritans. At the age of 16, John Brown left his family and went to Plainfield, Massachusetts, where he enrolled in a preparatory program with the Rev. Moses Hallock.

In 1846, Brown  moved to the ideologically progressive city of Springfield, Massachusetts where he found a community whose white leadership were deeply involved and emotionally invested in the anti-slavery movement. Brown and and his business partners intent was to represent the interests of the Connecticut River Valley’s wool growers against the interests of the region’s wool manufacturers.  From 1846 until he left Springfield in 1850, John Brown was a parishioner at the Free Church, where he witnessed abolitionist lectures by Frederick Douglass and Sojourner Truth. During Brown’s time in Springfield, he became deeply involved in transforming the city into a major center of abolitionism, and one of the safest and most significant stops on the Underground Railroad. John Brown’s Bible is still on display at St. John’s Congregational Church in Springfield, which to this day remains one of the Northeast’s most prominent black churches. Brown’s time in Springfield sowed the seeds for the future financial support that he would receive from New England’s great merchants, introduced him to nationally famous abolitionists like Douglass and Truth, and included the foundation of his first militant anti-slavery group The League of Gileadites

During the 1856 conflict in Kansas over slavery, Brown commanded forces at the Battle of Black Jack and the Battle of Osawatomie, paid for in part with funding from New England financial supporters. In 1859, Brown led an unsuccessful raid on the federal armory at Harpers Ferry, Virginia, that ended with his capture..

Brown’s attempt to start a liberation movement among enslaved African Americans in Harpers Ferry electrified the nation. He was tried for treason against the Commonwealth of Virginia, the murder of five men and inciting a slave insurrection. He was found guilty on all counts and was hanged. Southerners alleged that his rebellion was the tip of the abolitionist iceberg and represented the wishes of the Republican Party to end slavery. Historians agree that the Harpers Ferry raid in 1859 escalated tensions that, a year later, led to secession and the American Civil War