The tours are meant to be trajectories of discovery and learning. These are for people who don’t mind stepping off the road or occasionally get their feet wet. You will have to read the brochures closely, using them as a guide to poking around cellar holes and mill foundations; examining the map and tracing the old lines of settlement in stone walls in the forest; looking at what plants and trees tell us about what happened before; having a closer look at how land was measured and described two hundred years go and then used; or following the trajectory of the pipeline of the first Plainfield utility company. 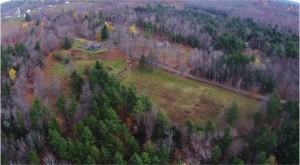 The landscape you will be exploring is now largely forested, dotted with few farms and some houses. But in the first decades of the nineteenth century, Plainfield was largely bare of trees, remaining so through until after the Civil War, and then various rounds of lumbering until the 1930’s. The town was settled mainly after 1780, and by 1830 it counted more than 1,000 inhabitants engaged in a mixed economy of sheep farming, mixed farming, small water-powered industries, and home production that produced such items as leather, maple syrup, broom handles, satinet (a woolen cloth), and palm leaf hats. By the 1830’s, the pull of the West became strong enough that Plainfield started losing population, a trend that continued until after World War II, and that contributed to the persistence of an indelible imprint in stone walls, foundations, and a changed ecology left by two hundred years of small industries, farming, sheep grazing, building of homes and barns, and burying the dead.

Hidden Walls, Hidden Mills was funded in part by a Cultural and Economic Development Grant from Mass Humanities. The project combines historical maps and research by Arvilla Dyer, Priscilla Allen, and Tom Packard with newly developing methods of reading the landscape through forestry/ecological/geologic mapping. It was put together by an incredible team of professionals who put in large amounts of their own time, and who were supported by intrepid volunteers of the Plainfield Historical Society.   The tours or adventures were developed by a cultural historian, a forester, a surveyor, and a stone mason, with the indispensable collaboration of a graphic designer. All of us became newbie-mapmakers in the process.

Funded in part by